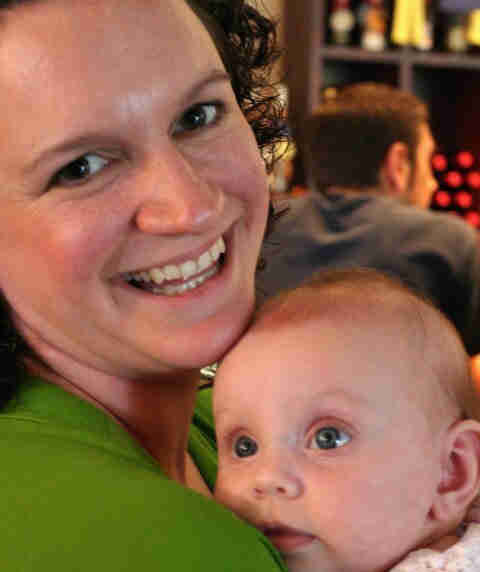 Because tongue ties have such a wide range of consequences, there are a broad range of medical professionals whose input can help you and your child as you navigate post-birth tongue tie issues.

In this post, I will discuss the role of the bodyworker, who can help your baby to experience the movements and the kinesthetic stimulation that they need to relieve tension from their bodies. Bodywork can benefit every baby, but I will also talk about why it is particularly beneficial for babies with tongue ties. When a frenectomy is planned, bodywork beforehand and afterward can help improve surgical success, restore functionality, and foster proper development of the face, jaw, and airway.

What is bodywork? Bodywork is the use of hands-on touch and physical therapy to allow a baby’s soft tissues to release tension and reorganize. A typical bodywork session could take place in the bodyworker’s office or in your home, and you may hold your baby while the bodyworker works on them, or the baby could be placed on a bodyworker table, on the floor, or in the bodyworker’s lap. The bodyworker will use slow, gentle movements across the baby’s body, paying particular attention to the head and neck, the shoulders, trunk, hips, and feet. The bodyworker may touch and attend to the inside of the baby’s mouth as well. They may reposition the baby as they work to help with alignment.

Bodywork should not be painful or uncomfortable for the baby in any way. Generally, babies find touch pleasant and will experience the sessions as relaxing. Babies may cry during the session due to the stimulation, but if you are concerned at any time then you can let the bodyworker know. Typically bodywork will be between one and ten sessions, depending on the particular needs of your baby, the type of bodywork and each session usually lasts about 30 minutes for infants.

Bodywork is performed by a professional such as a skilled osteopath, a chiropractor (trained in craniosacral therapy and treating newborns), an occupational therapist, a physical therapist, or in some cases a highly skilled massage therapist with extensive in infants and craniosacral therapy. The bodyworker administers this physical therapy in order to relieve tension in the baby’s body, which strengthens and lengthens the muscles – especially those associated with breathing and breastfeeding. Bodywork also helps support neurological integration, the process by which the baby learns to control and move their body. There can be issues with reduced neurological in Caesarean or mechanically assisted births, so bodywork can help redress this issue by giving the baby the natural stimuli that they may have missed due to the birthing process.

Why is bodywork necessary? As just mentioned, the birthing process has an effect on the way that the baby emerges into the world. In the case of assisted births, babies do not benefit from the natural process of having their autonomic system turned on, and are furthermore birthed in a state of extreme tension. This is known as a process called “armoring,” which can involve the baby having breathing issues, having cold or sniffle-like symptoms, and having limited movement of the chest or other body parts.

Bodywork interprets these issues as related to tightness in the chest, throat, or other body parts. Babies may be oversensitive to touch, suggesting an issue in a particular area. Bodyworkers seek to locate these areas of tension or hardness and to gently stimulate the area through touch, allowing the connective tissues to relax and the tension to dissipate.

When the topic of bodywork is brought up, many pediatricians are skeptical about how necessary it is. They will often say that the human race has managed for thousands of years without bodyworkers, so why are they necessary now? The answer to this is that the way we live now is vastly different to how we lived hundreds or thousands of years ago and this affects both gestation and the birthing process.

Even a few hundred years ago, we moved a lot more such as walking regularly and performing manual labor in fields or in the home. Pregnant women were not exempt from this work – they would work well into their pregnancies and regularly perform movements like squatting, bending over, and walking. This exposed babies in the womb to kinesthetic stimulation. In addition, the birthing process itself was very different. Babies were born in a natural process without induction (through drugs like Pitocin), manual assistance (like forceps or vacuum extraction), or Cesarean section. All of these factors helped alleviate the need for a bodyworker, as did birthing rituals such as passing or holding the baby, or rubbing the baby with salt as is done in some cultures.

In the past, the tensions that babies experienced could be naturally worked through various methods, including sleeping the baby on their stomach or wearing them close to the parents’ bodies (which is still quite common in some areas of the world).

Why is bodywork important for tongue-tied babies? Today, babies typically spend a lot of time in one position in utero. Some babies will be born with torticollis (asymmetrical head or neck position) which can continue to affect the connective tissue and the shape of the head long after birth. These modern birthing practices can mean that babies are born with strains, tensions, and torsions which can lead to a host of problems over time. What’s more, so-called “container babies” spend excessive amounts of time either swaddled (sleeping on their back), or otherwise immobilized in car seats, swings, bouncers, strollers, and more. This is largely known to be the reason for a huge increase in positional plagiocephaly, or flat spots on the head. Bodywork addresses these issues.

All of the issues that bodyworkers fix can be a problem for tongue-tied babies – breathing and eating in particular. Bodywork can help babies to ameliorate the negative effects of tongue tie. Because facia is how we are connected from head to toe, and because the tension created in the mouth from the tongue tie creates tension elsewhere in the body, the help of a bodyworker can release the tension pre-surgery, making the surgery easier for surgeon and baby. The less tension in the mouth, neck and head after surgery means less tension on the wound and better healing overall. Bodywork is most useful when performed before and after frenectomy surgery.